I am pleased to present on the Writing, World and Well Being platform a new guest blog, “The Cow in the Elevator,” from my colleague Tulasi Srinivas. It was originally published online as a contribution to The Immanent Frame: Secularism, religion, and the public sphere, a social media platform of the Social Science Research Council.

Tulasi Srinivas is professor of anthropology and religion at Emerson College, Boston, and a Luce-ACLS Fellow for Religion, Journalism and International Affairs for 2018-19. She is the author of several award-winning books including the recent, The Cow in the Elevator: Explorations in an Anthropology of Wonder (Duke University Press, 2018).

This entry is a wonderfully written blog on the anthropology wonder–very good medicine for troubled times. Please pass on it on to friends and colleagues.

The Cow in the Elevator? An Introduction

A Cow in an Elevator?

In January 2009 I found myself helping three priests lure a reluctant cow into an elevator in the city of Bangalore, India. The cow’s handler and the priests pushed at her rear end while I held tempting ripe bananas in front of her.

I wondered why the priests were attempting to shove the cow into the elevator, but in the whirl of shouting and pushing that was involved, I forgot my bewilderment and entered into the spirit of the exercise.

Finally, we were successful. Having wedged the cow sideways into the elevator, we all rode upwards triumphantly.

I had stumbled upon the cow and the priests because I was wandering around the neighborhood, looking for an address. I had been invited to a house-blessing ceremony by a priest—a griha pravesham, translated from Sanskrit as “entry to the home.” A key part of the griha pravesham, a ritual derived from ancient Hindu agrarian customs, required a sacred cow to cross the threshold of the new house. I assumed the blessing was for an independent house, as I had been to several of these rituals before, where the threshold between the garden and the new home was decorated and blessed.

But riding in the elevator with the cow leaning heavily against me, it suddenly dawned on me that the new “house” to be blessed must be a luxury apartment in this tall steel-and-marble-clad modern building, and that the priests were improvising, creatively rejiggering an essential ritual element to suit the needs of a modern moment of dwelling.

Once off the elevator, the cow quickly regained her composure, chewing her cud in a bored manner as we led her past an expensive marble foyer. When it was her turn to participate, she wandered through the million-dollar home, lifting her hoofs over thresholds, and stoically leaving a heap of dung on the kitchen floor, much to the delight of the participants, for whom the cowpat was an added blessing.

I heard the word adbhutha several times that day to describe all the activities, as the priests tried to explain to me, the curious anthropologist, what was happening and how it could be understood. I translated this Sanskrit term as “odd” or “unusual,” and it seemed appropriate, given the surprise of finding a cow in an elevator.

But I should not have been surprised. After all, anthropologists have argued for nearly a half century that ritual is a space of otherness, a magical space, a counterpoint to the everyday and the mundane. The anthropologist Victor Turner, who studied Ndembu ritual life, suggested that ritual was a space of dynamism, an anti-structure, in opposition to society’s everyday mundane structure. He said, and I paraphrase, that ritual participants are elevated into the anti-statis of ritual, cross the threshold, and return rapidly to the statis of structure, renewed. In this reading, it is the statis of structure that is valuable to society. Ritual is dynamic and transformatory, but necessarily limited.

But as I wondered about cows riding elevators (which I found recently, might be a Bangalorean “thing”) I thought: what if the point is not to return to stasis (however transformed through ritual) but to enter a new space of creative fracture? What if the goal is to be wonderstruck? What if one seeks to spill the magic of ritual into the everyday, and blur the boundaries between the two? What if the goal is not stable continuation, but a subtle transformation of the world? What if, like the creative priests of Bangalore, one seeks to improvise, to enable a centuries-old blessing to fit a much-changed world? What if I was witnessing a seaming together of a deeper meaning of ritual with the modern world toward a richer condition of living?

In thinking and writing about these questions for sixteen agonizing years, I realized there was another translation to the word adbhutha that encompassed all these joyful, creative feelings and doings: wonder. What if the ritual creativity that I saw in Bangalore was a move toward wonder? After all, that was what the priests had been saying . . . that being wonderstruck was the point. Maybe I should have taken them at their word. Literally.

Wonder and wondering—the creativity and curiosity of everyday life—are ungraspable, indescribable, and immeasurable, yet slyly naive and densely suggestive. We know it when we feel it. The religion scholar Rudolph Otto in The Idea of the Holy argued that wonder was the attribute of divinity and the feeling that interaction with the divine provoked what he termed the “numinous.” Otto described the numinous as encompassing awe, bewilderment, curiosity, confusion, excitement, ecstasy, fear, dread, marvel, mystery, perplexity, reverence, surprise, and supplication. Distilling Otto’s description, I realized he was speaking about wonder and being wonderstruck, too.

But in thinking about the care required to hoist a cow into an elevator to create a moment of wonder, I began to wonder: Could we eff the ineffability of wonder differently? What if wonder was not an act of God that “struck” one, but was a response to a deliberate conflation of events? Could wonder be deliberately pursued?

Once I recognized wonder as pursuable and strategic, I saw and heard wonder everywhere in the temples of Bangalore. For example, I found the priests and ritualists had hired a commercial helicopter to shower the temple tower with rose petals for the consecration of a deity—a wonder-full event. The Bangalorean devotees were technocrats, living in the “Silicon Valley of Asia,” as Bangalore was known, yet they were wonderstruck by the circling helicopter, clapping with delight, likening it to Hindu mythic flying chariots. 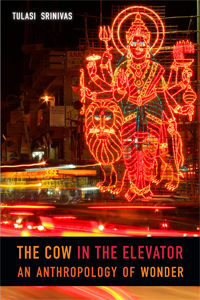 I argue in The Cow in the Elevator: An Anthropology of Wonder (a folio of tangled observations that range from the philosophically speculative to the quotidian, and that date from 1998 to 2016) that technocratic modern lives in Bangalore are enlivened by wonder. I understood that wonder offered the ritual practitioners a way to radical social hope in the face of consuming neoliberal depredations. Wonder enabled ritual participants to both rupture modernity and capture it simultaneously.

But the broader point is to show that all this mental wandering and wondering advances a more expansive idea of intellectual responsibility for us as scholars, that is to recognize and to show our interlocutors, the priests in Bangalore and others, have a philosophy rather than to explain their mores through philosophy. Could everyday conversations—of life, of time, and of interactions—be precisely what philosophy is made of?

One day, rather than the garland of yellow marigolds or of gold coins the deity was traditionally offered in that season, the priests had decided to decorate the temple in garlands of golden American corn, substituting one form of golden yellow for another (see image above). I saw such unapologetic and joyful ritual creativity all around me in the Bangalorean temples.

It seems that wonder is provoked and stoked deliberately in ritual worlds in Bangalore, and perhaps in the whole of South Asia. The conditions for the breakthrough of wonder were established, and wonder was invoked, incited, and invited in. In The Cow in the Elevator, I curate several dozen examples of everyday Hindu rituals that are creative, in which a provocation of wonder is woven through.

This revolutionary move to wonder by the priests created space for what I call an “experimental Hinduism” that uses new and modern objects and ideas, braided with traditional liturgy in innovative ways to strategically invoke wonder. It demands an equally radical and robust interrogation from us scholars. My observations of wonder and its cousins, astonishment and delight, propelled me toward the questions I ask about religion, ritual creativity, and ethical life.

When rituals changed, as they frequently did in Bangalore, I understood it was not a mistake or failure, as many ritual theorists have suggested, or even a “selling out” to modern forces, as other more conservative theorists have argued, but rather, an essential creativity. By observing cows in elevators and helicopters raining flowers or golden corn decorations, I found that Bangalorean ritual practitioners aligned practices of wonder with moments of ritual creativity sporadically, and that these moments sedimented and became instituted as part and parcel of the ritual over time. Contending with and interrogating ritual creativity in pursuit of wonder shifts the scholarly quest from marking the hollow focus of ritual as domesticating and efficacious, to more fully understanding ritual as creative and world building.

Scholars fail to see ritual and to understand it as my interlocutors did—not as merely domesticating the dangerous efficaciously, but as creatively transforming the world. Therein lies the problem. The available scholarly conceptual frameworks and critical terminologies are ill equipped to analyze the intricacies of ritual creativity.

Importantly, this turn to wonder not only presents a different understanding of ritual, but of life itself. As the ritual participants pushed cows into elevators, hired helicopters, and piled corn into baskets, they waited for wonder, creatively exploring imagined possibilities just beyond the horizons of their thought, changing ritual process, to both counter modernity and accept it, and all the while remaking their ethical lives. To me, wonder invites us, as scholars of religion, to rethink our understandings of place and people, of form and meaning, and of ethical life.